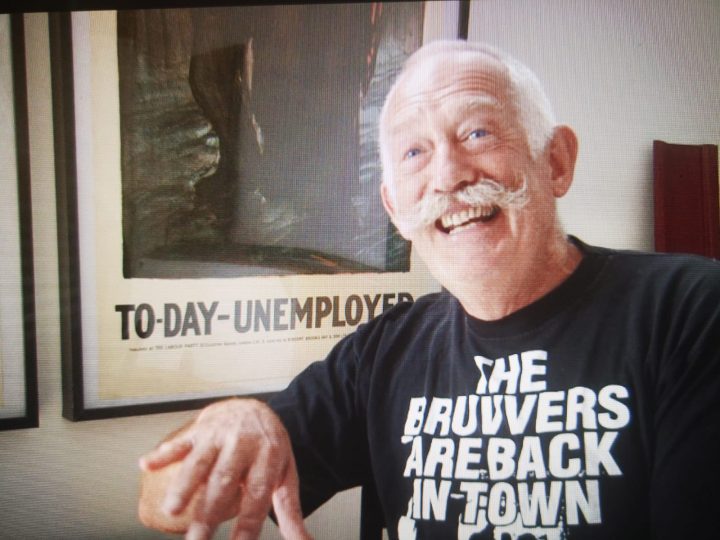 In 1983 Michael’s community theatre company, Bruvvers, had lost its base on the Shields Rd and he was looking for new premises. He always had an eye for a bargain, and the former bonded warehouse, known locally as the Cluny, was going for a song. Not having any money he borrowed from his brother to buy it. He never showed any proprietorial ownership of the building, and was hardly a conventional landlord. Michael was in spirit an anarchist. He lived his politics.

Schooled at Joan Littlewood’s Acting Academy E15, he saw his opportunity to build a ‘Fun Palace’. On the top floor he made a rehearsal space, costume store, and an office for Bruvvers. He also built a flat to live in. He always had a building project on the go. The flat became a family home and his son Angus still lives there.

Word went out that he was looking for kindred spirits wanting workspaces to join him. I was one of the first. We were all self-builders, some better than others. The City Council looked on with increasing concern at our ad hoc development. So money was found to finance the work necessary to bring us within regulations. Always cagey of Michael’s maverick ways, the grant was to be made to the tenants now constituted as a secondary cooperative 36 Lime St Ltd. In 1986, Michael ignored the advice of his solicitor and offered the co-op a 99 year lease on the main part of the building on the most generous of terms. Bruvvers paid rent on the same basis as the rest of us, and Michael played his part as a member of the co-op. He never attempted to dominate our sometimes convoluted decision-making. I am sure he was frustrated at times! His focus and commitment was always on ‘Taking Theatre to Tyneside’ – the strap line on the Bruvvers van along with ‘Laissez les Bon Temps Roulez’.

Given the absence of regular funding, Michael dreamed of building his own bar whose profits could subsidise his work. The Cluny bar was opened in 1999 and a theatre some years later, but he was unable to make either pay and both were sold on.

His original vision for a Fun Palace, however, has actually been realised. The Cluny now thrives and incorporates the theatre as a venue. And, 34 years on, 36 Lime St is still fulfilling its mission to provide long-term security and affordable rents for its members.

Michael was a huge and generous character who has left a lasting legacy, not just in the Ouseburn but in the memory of all those who worked with him and saw his plays. At 36 Lime St we are custodians of what is one of the most significant contributions he made to the cultural life of Tyneside.

We all owe him a huge debt of gratitude. May we honour his memory.

« ALL PUBLIC EVENTS AT 36 LIME STREET DUE TO THE CORONAVIRUS/COVID 19 POSTPONED UNTIL FURTHER NOTICE
OPEN! STUDIOS 2021 »